When we started implementing the EPIM ReportingHub project, we had to come up with a mechanism that allows us and others to represent tabular reporting data derived from an RDF triple store. For example, there needed to be a table that lists drilling fluid information at certain depths over time. We decided to represent those tables as parameterized SPARQL SELECT queries, and in particular as SPIN Templates. This made it possible to assemble reports consisting of multiple tables quickly. However, we noticed that a SELECT query does not provide enough information to render the tables nicely, for example to specify the text that shall appear in the header of a column or the relative widths of each column. We had added some custom properties to capture such column metadata with each SPIN template. Using this metadata, our report generator was enabled to print prettier tables.

TopBraid 4.3 introduces this as a generalized feature. I have added a couple of new classes and properties to the SPIN Modeling Vocabulary itself, because I believe this will be of general interest. The extension is now online as the SPIN Column Metadata specification.

In a nutshell, each SPIN SELECT Template can now point to one or more instances of the new class spin:Column, and each spin:Column may define a human-readable label, a width, and a column type. Here is an example of how such column can be entered with TopBraid 4.3: 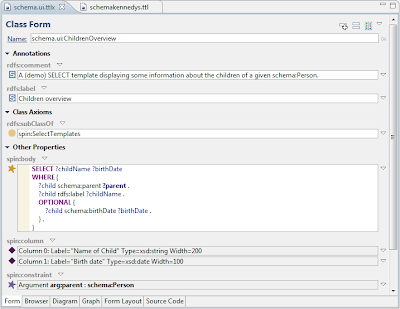 Drilling down into the values of spin:column, we can see that each spin:Column is a blank node with an index and several other optional properties. In TopBraid, use “Create blank node…” to add new columns: 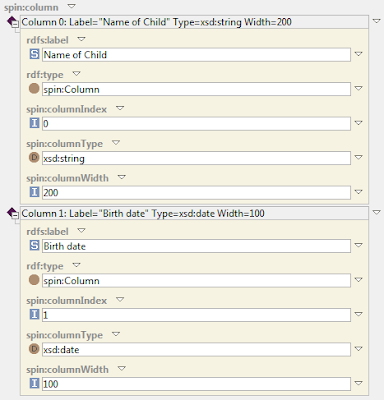 An example rendering of such a table using the swa:ResultSetGrid component of the SWP Application Component Library (SWA) is shown below:

The code to produce such a table with SWP is very compact: 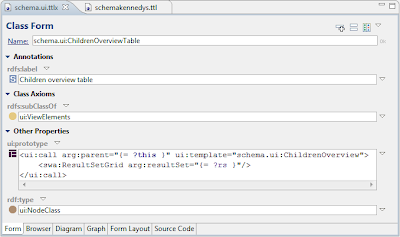 When you instantiate a SPIN template with ui:call, the produced result set will carry any column metadata around, and the functions of the SPR namespace can be used to discover the metadata dynamically. For example, use spr:colName(?rs, 0) to get the name of the first column, or spr:colWidth(?rs, 0) to get its width.

Since all this metadata is represented in RDF, it goes without saying that anyone can query it using SPARQL and repurpose the metadata for different tools such as 3rd party reporting frameworks. The extensible nature of RDF also means that anyone is free to add extra properties such as the unit of measurement of a column or the property that it has been derived from.