How to: use the SPARQLMotion debugger

Since release 3.3, TopBraid Composer has included an interactive debugger for SPARQLMotion scripts that can make your development go much faster. TopQuadrant VP of Product Development Holger Knublauch wrote a nice overview of the debugger’s features in his blog; below is a short hands-on tutorial in the use of the debugger.

We’re going to put together a short SPARQLMotion script with a problem that prevents it from running properly. Experienced SPARQLMotion developers may notice the problem when we add it, but leave it in there—we’ll see how the SPARQLMotion debugger helps us locate it.

Our script will prompt the user for a string to search for and then list the first and last names of everyone in the sample kennedy data file included with TopBraid Composer who has that string as part of their first name.

First, create a new SPARQLMotion file and give it a base URI of http://www.topquadrant.com/debugdemo and a file name of debugdemo. (For a more detailed description of how to create a SPARQLMotion file, see the “Creating and running a SPARQLMotion script” chapter of the TopBraid Application Development Quickstart Guide.)

Once your new file is open, create the script by selecting Create SPARQLMotion Script from the TopBraid Composer Scripts menu, and for its initial module type select sml:EnterLiteral. This is the module that will ask the user to enter a query string, and you’ll find it under sml:ImportModules -> sml:ImportFromVariousModules. For the name of your new module instance, enter GetQueryString. Click the OK button and you’ll see your script on the SPARQLMotion workspace with its one module.

Double-click the GetQueryString module icon and enter queryString as the sm:outputVariable value and Enter query string as the sml:text value. When the script runs, this module will display a message box that prompts the user with this message. After the user enters a value into the field on that message box, the value will be stored in the variable queryString for use by later modules in the script. You are now done configuring this module.

There are two more modules to add. Drag an Import RDF From Workspace module from the Import from Local section of the SPARQLMotion palette onto your workspace and name it GetKennedysData. Double-click it to configure it, and set the sml:sourceFilePath value to /TopBraid/Examples/kennedys.rdf. For the third and final module, drag an Apply Construct module from the RDF Processing section of the Palette and name it FindMatchingNames. Set its sml:replace value to true so that the module passes along only the triples that it creates. Set its sml:constructQuery property to the following query:

(Instead of setting the prefix for the kennedys data at the beginning of this query, you could also do it on the script file’s Ontology Overview screen.) This query passes along the firstName and lastName triples for anyone in the data file who has the value of the searchString as part of their firstName value. (The “i” provided as the third parameter to the regex() function tells it to do a case-insensitive comparison.)

Connect up the three modules so that the script look like this: 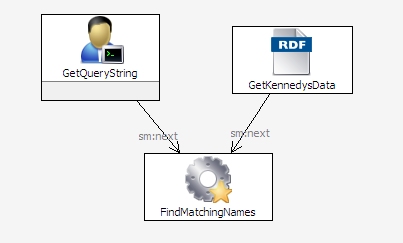 To test the script, select the FindMatchingNames module and click the green arrow at the top of your workspace to run all the modules up to the selected one. When the GetQueryString module displays a message box asking you for a query string value, enter Carol.When the script finishes running and you see the SPARQLMotion Script Executed message box, make sure that the Display result triples checkbox is checked before continuing so that you can see what data the script found.

Although the kennedys data includes a Caroline and a Carolyn, you won’t see any triples in the SPARQLMotion Results view when the script is finished running. Let’s use the debugger to find out why.

toggles whether the selected icon is a debug breakpoint. On the SPARQLMotion workspace, make sure that your FindMatchingNames module is selected and then click that small blue circle. This will add a blue circle to the module icon to indicate that it is now a breakpoint. You can set as many modules you like as breakpoints, but for this exercise we’ll just set this one.

Click the green arrow to run the script again, enter “Carol” as the query string. When the script reaches the module with the breakpoint, it displays the debugger window: 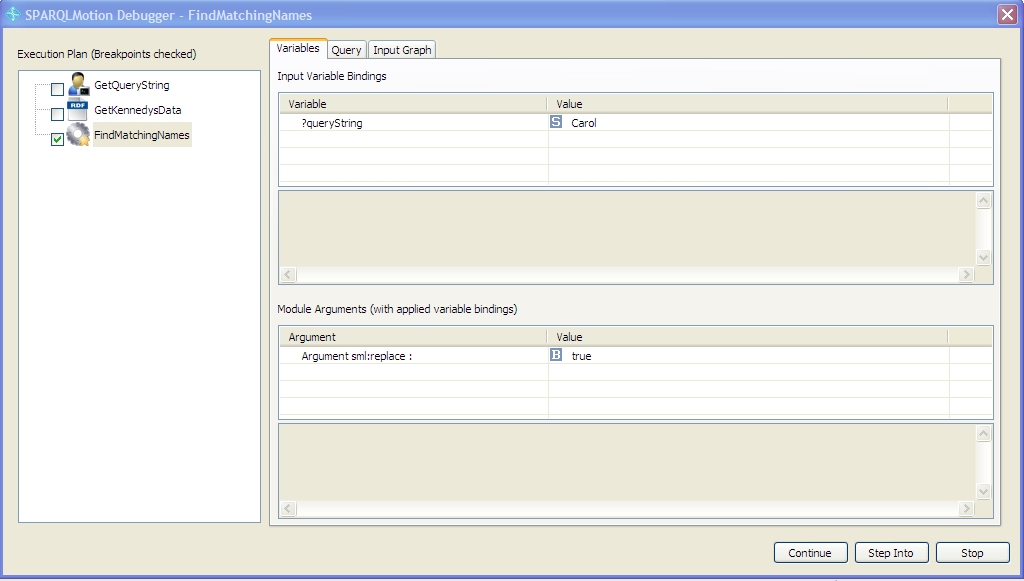 The left part of the window has the Execution Plan, which lists the modules in the order that they will be executed, with a check mark next to each module that’s been set as a break point. As you debug, you’re free to check and uncheck any of these. The bottom of the window displays the arguments to the module and their values, and the top shows three tabs: Variables, Query, and Input Graph. Let’s start with the last tab: click Input Graph.

On the tab’s Input Graph panel, click the plus sign, and you’ll see the that kennedys data is definitely being provided as input to the FindMatchingNames module. Click that line, as shown below, and you’ll see some of its data appear in the lower panel. Scrolling down there shows that CarolineKennedy and CarolynBessette are in the data being passed along, so we can’t blame our script’s retrieval of data for its inability to show the expected results. 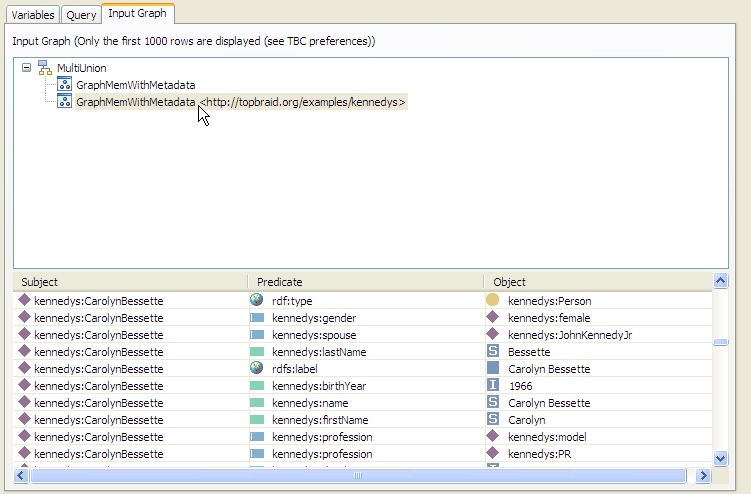 Now select the debugger window’s Query tab. This lets you execute test queries on the data passed to the module. Because FindMatchingNames is an Apply Construct module, the default query shown on the Query tab is a SELECT version of the CONSTRUCT query that you entered when you created this module.

You can enter any SELECT query you want in in this panel of the debugger window and run it without affecting the state of the running script. Commenting and uncommenting lines of this query and then re-running it is a particularly valuable technique for exploring what information is available to your SPARQLMotion script at this point in its execution and what your application logic has done with that data.

Perhaps the problem is in the query’s FILTER expression. Add a pound sign at the beginning of that line to comment it out, and click the green triangle in the upper-right to run the SELECT query shown in the debugger window. You’ll see plenty of s, first, and last values appear in the lower panel, including Caroline Kennedy and Carolyn Bessette, so it looks like a problem in the FILTER expression prevented the query from passing along the requested data. The ?first variable is clearly being set properly, because we saw plenty of output when we commented out this line, so maybe the problem is with the ?searchString variable referenced in the FILTER line’s regex() function call.

Click the debugger window’s Variables tab to display it, and you’ll see the problem: the GetQueryString module stored the entered value in a variable called queryString, and the query’s FILTER expression was checking values against a non-existent searchString variable. (In a real debugging session, the Variables tab is probably the first one you’d check, which is why it displays first.) Go back to the Query tab, uncomment the FILTER line, change ?searchString to ?queryString, and click the green arrow. You should now see Caroline Kennedy and Carolyn Bessette and no one else show up under the query in lower part of the debugger window.

At this point, you’ve only fixed the debugger window’s temporary query used to explore the workings of the script, and the application itself still needs to be fixed. Click theContinue button to resume execution of the script past the breakpoint. If there were more modules and any of them were set as break points, the Continue button would stop at each one and display the debugger window, but your script has no more breakpoints. (If there were more modules after FindMatchingNames module, the Step Into button would execute them one at a time so that you could review the three debugger tabs for information about those modules as they executed.) Once the script completes, change ?searchString to ?queryString in the FindMatchingNames module’s query, click the debugger breakpoint icon while the FindMatchingNames icon is selected to turn off its breakpoint indicator, and run the query again with the same “Carol” input string. It should run with the expected results appearing in theSPARQLMotion Results view.

Debugging your own applications

Although we ran this SPARQLMotion script from within the SPARQLMotion editor, you can still set breakpoints and check all the same information about a SPARQLMotion script that is invoked from somewhere else—for example, from a TopBraid Ensemble Application or a from web service. (This assumes that the script is running under the TopBraid Live Personal Edition Server included with the TopBraid Composer Maestro Edition, which you use to develop these scripts.) This makes the debugger invaluable for just about all kinds of TopBraid development, and you’ll find more uses for it as you use it more. Again, review Holger’s blog posting for additional ideas.