How to: deploy your TopBraid applications on a TopBraid Live Enterprise server

So far, as we’ve learned how to create a TopBraid Ensemble application, how to create and run a semantic web service, and how to call a SPARQLMotion script from TopBraid Ensemble, we’ve always used the TopBraid Live (TBL) Personal Server that’s built into TopBraid Composer (TBC) to test our applications. However, the reason developers create these applications on TBC is for others to use, and that’s where the TBL Enterprise Server (purchased separately from TBC) comes in.

In the following example, I’m going to deploy an application to a TBL Enterprise Server running on my local machine and configured as a Tomcat servlet listening to port 8080, making the URL of the server http://localhost:8080/tbl/tbl. If the Enterprise Server was installed on a host named www.domain.com and used the same port, the URL would be http://www.domain.com:8080/tbl/tbl, so you would follow the same steps, substituting that name.

Deploying apps to the server

If you package all the files needed to run an application in a single project, which is a root file in TBC’s Navigator view, it’s a convenient way to upload a collection of related files to the TBL Enterprise Server. So, for example, if the personScripts.sms.n3 file that you created in the last posting is not in its own project, create one called personProject and move it there.

Right-click on the project folder icon in TBC’s Navigator view and pick Export. On the Export dialog box, select “Deploy Project to TopBraid Live Server” from the TopBraid Composer section of the menu and click the Next button.

On the Deploy Project to TopBraid Live Server dialog box that appears, enter the URL of the server where you want to send your app (for example, http://localhost:8080/tbl/tbl, as described above) in the Server URL field. The remaining fields are self-explanatory: enter a user name and password if the server was set up to require it (always a good idea for serious production applications) and check “Overwrite existing project with the same name” if there is any chance that a project with that name already exists.

Click the Finish button, and TBC will show you upload progress and then let you know it’s finished: 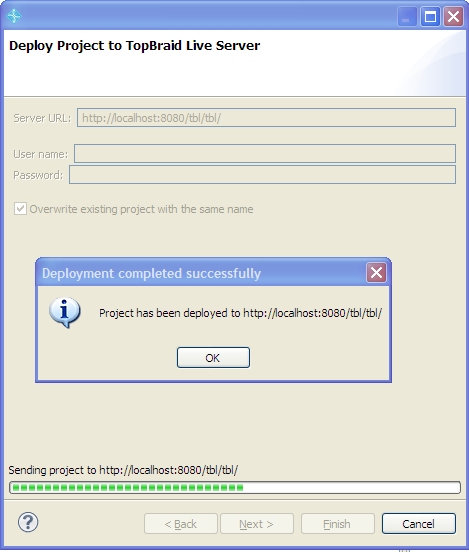 If you sent a project with the personScripts.sms.n3 file created in the How to: call a SPARQLMotion script from TopBraid Ensemble posting to the Enterprise server, and a different computer can access that one as http://www.domain.com:8080/tbl/tbl/ or http://192.168.1.2:8080/tbl/tbl/, then sending a browser on the other computer to one of these URLs will display the TopBraid Suite Console screen. On that computer you can then follow all the steps described in that posting’s “Testing It” section, even though you’re doing it remotely, right up through the use of the “Age at Death” menu choice that you implemented.

You can upload a web service to the Enterprise TBL server the same way. For example, in How to: create and run a semantic web service we saw that after defining a web service in the file ws1.sms.n3 and registering the function that invokes the service by selecting “Refresh/Display SPARQLMotion functions” from the TBC Script menu, you could test this web service by entering the following URL in a browser:

This sent the request to the TBL Personal Server included with TBC. To deploy the web service on the Enterprise Server, upload the project that holds the ws1.sms.n3 file file as described above. Then, if the server is running on the local machine and listening to port 8080, you can test it with the following URL:

To call this web service from another computer on the same network (which could be another one on your intranet, or could be a computer on the public internet if the machine running the TBL Enterprise Server is accessible there), substitute the appropriate computer name or IP address for “localhost” in that URL.

As we’ve seen in an earlier posting, when you create a TopBraid Ensemble (TBE) application, you save your screen layout with the Save App button. After clicking this button, the Save To field on the Save Application As dialog box shows server.topbraidlive.org as the default project in which to save the application, but you can select another one. (You can’t create a new project from within TBE, so if you want to save the application in a particular project, make sure you’ve already created that project you need in TBC’s Navigator view.)

If you named your TBE application MyTBEApp and saved it in the project MyTBEProj, in TBC’s Navigator view you’ll see that it stored MyTBEApp.n3 in a subdirectory of MyTBEProj named user-applications. Once you upload the MyTBEProj project to the TBL Enterprise Server the same way you uploaded the other projects described above, you’ll see MyTBEApp listed on the right side of TopBraid Live’s TopBraid Suite Console screen at http://localhost:8080/tbl/tbl/ under the column heading “Applications Under Development”:

When you click the application name on the TopBraidSuite Console, if it wasn’t saved with a particular set of data, it will prompt you to pick one. Once you see the application screen you designed, your browser’s navigation toolbar will show the URL that you would use to send users directly to that application once you substituted the computer name for “localhost” as described above. It will be a long URL, so instead of actually giving that URL to your users, you’d be more likely to use it as the href value of a link on a web page that takes them to the application.

TopBraid Composer puts a lot of capabilities at your fingertips. When you copy the web services, TBE applications, and any SPARQLMotion scripts called by those TBE applications from TBC to a TBL Enterprise Server, you can make the power of your semantic web applications available to a wide range of people and applications throughout your enterprise or even throughout the World Wide Web. That’s a lot of power.